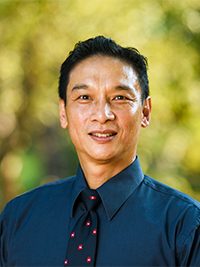 Qianping Guo is an Associate Professor of Dance at The University of Alabama, has been awarded certification as a teacher of “methods of teaching classic dance”  from Bolshoi Ballet Academy of Moscow and Ballet Heritage/Vaganova Ballet Academy of St. Petersburg, Russia. He is a native of China where he began his ballet training at the age of eleven with Shenyang Music Conservatory, and in 2002 he graduated from the University of Arizona in Theatre Arts & Dance with his MFA. He has danced with two of the tops ballet companies in China and America, including Liaoning Ballet of China and Pacific Northwest Ballet in Seattle. Guo has performed many principal and solo roles of ballet including Swan Lake, Sleeping Beauty, Don Quixote, Gisslle, Le Corsaire, and George Balanchine’s ballet Jewels Rubies, Stars and Stripes, and Midsummer Night’s Dream. When he was a dancer, he participated in many national and international ballet competitions including China’s 1st National Ballet Competition in 1985, in which he won the silver medal; the 2nd International Ballet Competition in New York in 1987; the 13th international Ballet Competition in Varna Bulgaria in 1988; and the 7th International Ballet Competition in France in 1988, in which he won the gold medal. He has been a valuable liaison in international studies and teachings , developing dance academic program exchanges. He has used his diverse background to his advantage, teaching in China, Japan and America and combining methods to develop students’ artistic careers. The Chinese and American students he’s mentored and coached (Jolie Rose Lombardo, Jiao Yang and Lumeng) have gone on to win gold and silver medals at international and national ballet competitions. The teachers he studied from at Vaganova Ballet Academy and Bolshoi Ballet Academy are Ludmilla Safronova, Irina Kolpakova, Elena Poryvkina, Eldar Aliev, Georgii Gusev and Vera Kulikova. He also is a certified teacher for American Ballet Theater’s National Training Curriculum.