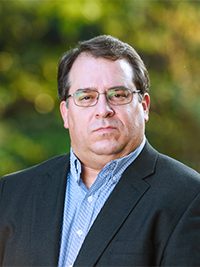 Specializing in technical production and entertainment automation, Randy joined the UA faculty after working professionally with Fisher Technical Services in Las Vegas, Nevada, where he continues to work as a consultant and designer.

Prior to Fisher, he was at the University of Illinois at Urbana-Champaign serving as the Chair of Scenic Technology, where he was responsible for the graduate and undergraduate programs in Technical Direction. While there he consulted on the World Premiere of Mikel Rouse’s The End of Cinematics and served as the Technical Director/Designer for Ralph Lemon’s World Premiere of Come Home Charley Patton.

He is an active member of the United States Institute of Theatre Technology and served as the Digital Media and Technology Coordinator for the United States entries into the 2007 Prague Quadrennial International Exhibition of Scenography and Theatre Architecture in the Czech Republic. He is also a member of the Southeastern Theatre Conference and the Institute of Electronic and Electrical Engineers.

Prof. deCelle was responsible for automation design on numerous projects, including