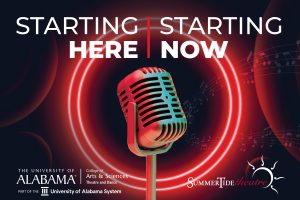 If the prospect of heading for a carefree Gulf Shores vacation just like in pre-pandemic days makes you want to sing, the University of Alabama’s Department of Theatre and Dance is about to crack open a whole songbook for you.

For more than 15 years the department has brought faculty and students down for a seasonal production called SummerTide. The eruption of COVID-19 canceled what would have been its seventeenth season. Now SummerTide has announced that it will return in June with “Starting Here, Starting Now.”

“We’re excited to be back,” said director Matt Davis, an assistant professor and the department’s head of directing and stage management. “I think with ‘Starting Here, Starting Now,’ it’s literally a show about going out and exploring and seeing the world, and seeing the world from kind of an open and new, joyful lens. And I think that’s a little bit of what everybody needs right now.”

As one might imagine, the restrictions of the past year presented many more challenges for the Department of Theatre and Dance beyond the cancellation of one summer program. Davis said that over the course of the 2020-21 academic year, faculty and students did their share of experimentation with socially distanced productions and online presentations.

According to promotional materials, “Starting Here, Starting Now” will be the department’s first show with a live audience since the pandemic began.

Davis said the past year wasn’t all bad: Challenges demand solutions, which led to some fresh thinking. “You kind of learn things from the restrictions,” he said.

That carried over to plans for SummerTide: Producers preferred a production that didn’t require a big ensemble cast, but they also wanted something that felt thematically appropriate.

“It was a matter of picking a show that was conducive to the environment,” said Davis. “That’s how we landed on ‘Starting Here, Starting Now.’”

The revue, first performed in 1976, is an unlikely hit for Tony- and Oscar-winning partners Richard Maltby Jr. and David Shire. They’re best known for shows such as “Big,” “Baby,” “Closer Than Ever” and “Ain’t Misbehavin’.” “Starting Here,” by contrast, is almost a collection of B-sides, an assortment of odds and ends that found a life of their own.

“It’s a collection of all these tunes they wrote for movies and for Broadway plays that never came into full fruition,” said Davis. “They’re these beautiful songs that never made it to full productions.”

(In a 2012 interview, composer Shire confessed that “I thought it was a terrible idea to have a show made up of songs from flop or aborted shows.” Lyricist Maltby said he was pleased to rediscover songs that were solid despite the failure of the shows they were written for. “When the show doesn’t work, you tend to flush everything down the toilet,” he said.)

This collection of tunes turned out to fit well together.

“When you look at the overall theme that’s presented in it, it’s this idea of kind of restarting and experiencing relationships and love from a restart, whether that’s young love or someone starting over after lost love,” said Davis. “We’re finding a new normal in theater, so this idea of starting anew resonated, and we thought it would be a good thing to share.”

“Starting Here” was written for a cast of three, but Davis said this production will feature five young actors. For them and for others involved, it’s a monthlong residency that requires a professional level of commitment.

“This is development for them into their professional careers,” said Davis. “And we think of the actors when we think of that, immediately, but it’s also important to speak to the fact that this is opportunities for individuals in stage management and arts management as well.”

“It’s an introduction to our students into what it is to be in a professional summer environment,” he said.

The production runs June 6 through July 2 at the George C. Meyer Performing Arts Center in Gulf Shores. For more details on show dates and performance times, or to order advance tickets ($25 for adults, $20 for children 12 and under), visit www.summertide.org. After May 20, tickets also will be available through the Meyer Center box office, 251-968-6721.