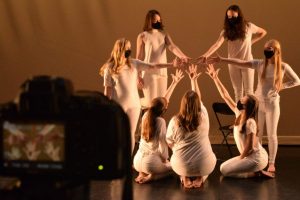 The Dance Alabama! Film Festival (DAFF) was one of the few in-person, off-campus events to be held this spring on Friday, April 9.

Located at the Bama Theatre, the fifth-annual festival, which was a collaboration between the UA Theatre and Dance Department, Music Composition Department and Film and Television Production Program, featured twelve student-led films.

This was also Dance Alabama! Film Festival’s first year to host the event as its own separate organization due to the event’s growing popularity and viewership.

With the festival, the departments wanted to showcase the creative prowess of their students.

In addition to showcasing student works, they also announced films that won awards, audience raffle winners and new Theatre and Dance, Music and Creative Media board members at the event.

A recording of the 12 student films can be viewed virtually until April 30, after reserving tickets through an emailed registration link.

Tickets are free for students and cost $5 for non-students. Reservations may be made on the university’s ticket website. Once reserved, instructions on how to access the festival will be provided through a confirmation email.

The festival is viewable on laptops, tablets and smartphones. Computer users should use Google Chrome or Firefox browsers. Purchasers may view the festival more than once, but all links expire by the end of the month.

With the only requirement being a runtime of five minutes, students were free to choose the themes of their films. The festival, as a result, had a mixture of abstract and narrative pieces.

Though students chose their work, the decision-making process was not exclusive to their opinions.

Faculty advisors such as Rebecca Salzer, an associate professor of dance, saw the films first as treatments, then rough cuts and later final cuts, then gave students feedback and methods for improvement.

Salzer said the festival was a result of students’ hard and passionate work.

“This isn’t a week-long project,” Salzer said. “This is more than a semester of work that has gone into building the relationships and fleshing out the concepts. So finishing one of these is a pretty huge achievement, and so when it’s shown it’s kind of a community celebration.”

Hannah Hall, a director and senior dance major, said this event allows dance students to showcase a project they were able to create all on their own.

“One thing I find unique about DAFF is the collaboration aspect,” Hall said. “As a dancer, in all my other shows we’re always given our music we have to dance to or we’re given our cast list or this person is filming your piece, so there’s more of a collaboration, teamwork aspect of it. Everyone’s ideas are coming together.”

Salzer said the festival allows students across dance, music and film to come together as equals and come up with their own film concepts. They are then able to have the rights to their films and showcase them in professional national and international film festivals.

“Often times in the arts there’s a defined hierarchy,” Salzer said. “For example, if the director is making the film, then the director kind of runs the show and everybody meets the director’s vision. In this case, the director can sometimes be the same person as the choreographer.”

Though the event was held in-person this year, certain traditions were unmet due to the pandemic.

Through their community outreach programs, Dance Alabama! is usually able to give students in local elementary schools, like Alberta School of Performing Arts and Montevallo Elementary School, the opportunity to shoot dance films of their own and have them featured at the festival. Unfortunately, the pandemic made this outreach impossible.

Despite this year’s drawbacks, Hall said she is grateful the festival has held a steady presence in Tuscaloosa.

She said this event will give viewers a deeper understanding of the arts and appreciation of their diversity, especially during this trying time.

“There’s just such a variety in what people are gonna see because no two films are the exact same like from the music to the way they’re filmed,” Hall said. “There’s even one film that’s done in one take and that one take is five minutes long versus like other films that are just in these short snippets.”

Hall also said she was excited to showcase a film she partook in on and off camera.

Her film, titled “Moments in Time,” featured choreography meant to represent common sayings referring to time itself like, “I have too much time on my hands,” and “Time flies when you’re having fun.”

Salzer said she hopes audience members have a great time.

“These are really great films,” Salzer said. “I mean, I think on a very basic level people are gonna get a lot of enjoyment from what these young artists are saying and communicating. It should just be a pleasure for people to watch.”

On a deeper level, Salzer said she hopes audience members recognize the skill set of students on campus and appreciate the collaboration among academic professionals, such as Amir Zaheri, music composition program leader, and Maya Champion, senior instructor of creative media.