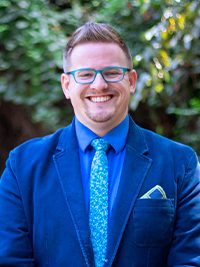 Matt’s accolades include 2 publications by the United States Institute for Theatre Technology, the Gretel Geist Design Award for his lighting design of The American Clock, Best Sound Design Pulsar Award Nomination for As You Like It, Best Lighting Design Pulsar Award Nomination for Legally Blonde, KCACTF Regional Selection for As You Like It (sound design) and Twelfth Night (sound and lighting design), and the Delta Zeta Faculty Appreciation Award and the Theatre Arts Faculty Appreciation Award at NMSU.

Matt is a long-standing member of the United States Institute for Theatre Technology; the International Organization of Scenographers, Theatre Architects, and Technicians; Phi Beta Kappa; and affiliate of the International Alliance of Theatrical Stage Employees.

Outside of teaching and design, Matt dedicates his time to his loving wife of 15 years, Mollie, his 9-year- old daughter, Lucy, and his 4-year- old son, Hugo.