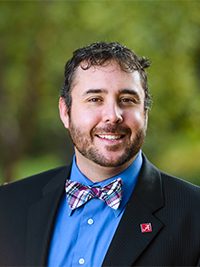 Dominic is an Associate Professor of Theatre and heads the Arts Management program at The University of Alabama. In addition, he serves as Artistic Director and Business and Operations Manager for the Department of Theatre and Dance as well as SummerTide Theatre.

Dominic is currently a Producer on the feature film “The Coming,” and is a Producer and General Manager for a new musical entitled “Shooting Star.” He is a member of the Southeastern Theatre Conference and serves on the Fundraising committee. He is also a member of the International Association of Venue Managers (IAVM), United States Institute of Theatre Technology (USITT) and the Association of Arts Administration Educators (AAAE). He has had the opportunity to work for non-profit organizations, municipalities and corporations in various locations throughout the United States.