Originally published in The Crimson White 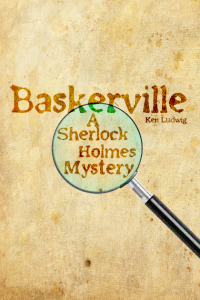 At the center of the annular Allen Bales Theatre, wherein only one raised platform remains stationary throughout the show, “Baskerville: A Sherlock Holmes Mystery” opened with a brief view of the mysterious circumstances leading to the death of Sir Charles Baskerville.

The University of Alabama’s Department of Theatre and Dance hosted “Baskerville” from March 28 to April 3.

Inspired by Conan Doyle’s 1902 novel “The Hound of the Baskervilles,” renowned playwright Ken Ludwig originally wrote and premiered his play adaptation of the novel in 2015. It is Ludwig’s adaptation that serves as the basis for MFA directing candidate Ashley White’s creative rendition of the play, an extravaganza that radiates vigor.

The play follows Sherlock Holmes and his assistant, Dr. Watson, who were recruited by Dr. Mortimer, a friend of the Baskerville estate, as they unveil the secrets of the Baskerville manor and struggle to ensure the inheritor of the estate, Sir Henry Baskerville, doesn’t meet the same fate as Charles Baskerville.

Dr. Watson serves as the play’s narrator, leading the audience through the events that lead to the strange and untimely death of Charles Baskerville and his journey to learn the truth about Baskerville’s demise.

Exhuming a narrative from 1902 and dressing it to fit the sensibilities of a modern audience is not an easy task, but with the right creative discretion — while maintaining a certain fidelity to Ludwig’s adaptation — White accomplished it with finesse.

“This is a different sort of show, where it’s 11 actors playing over 40 characters,” White said. “This was different than we’re used to because of COVID. I’m usually able to use the entire space, and this was a very short amount of time to put this together. But within those restrictions, I think we were able to create something very fun and very enjoyable and very lively.”

Despite COVID-19 and its related constraints, neither the integrity of the play nor White’s execution suffered. In fact, the play’s spatially contained, fast-paced execution was entirely successful in giving Ludwig’s adaptation a new breath of life amid the show’s whirlwind-like characters.

The play was at its best when it was able to synthesize the whimsical, more humorous aspects of the script with the darker side typical of a Holmes murder mystery. The contrast between dark and whimsical worked like the relationship between sweet and salty, dialectically elevating the play’s self-awareness to a point of comedic absurdity.

Furthering this theme of contrast, the constant running in and out of actors, with many assuming completely different roles with each reappearance, crystalised the play as a lighthearted redressing of the Holmes universe.

Dalton Causey, a junior majoring in theater, played Dr. Watson and anchored the spectacle of the show by remaining the one constant throughout the performance.

Other notable characters like Sherlock Holmes, played by Osama Ashour, a third-year graduate student studying theater, or Sir Charles, played by Spencer Astrow, a freshman majoring in theater, put forward more ancillary roles which did not anchor the play as Watson did even though they were crucial for plot development.

“At one point, I just became like the rock,” Causey said. “It’s a really fast-paced show. … I explained to someone last night it was like I was running a football field, that’s how it feels, but it’s great.”

Between the winding narrative, plot twists galore, ominous sound effects, moments of comedic reprieve and the cast’s overwhelming energy, White’s directorship proved a great success in the orchestration of a spectacular showing.